Feeling Down on Yourself? How to Boost Your Self-Confidence 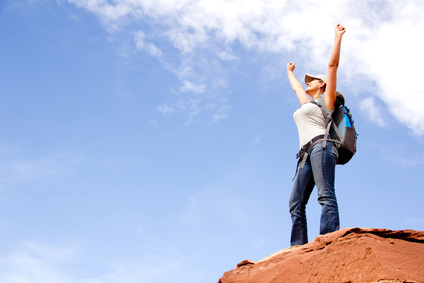 I’ve been coaching people of all kinds for years now and new clients frequently tell me that one of their goals is to improve their self confidence. I usually respond by saying: “Great goal! I love working with people on building confidence, we will plan to make great strides in that area.”At which point the person says: “I hate to tell you this, but prepare to be disappointed. My confidence is so low that I don’t think anyone could possibly ever help me. I’m probably the one person who you won’t be able to help in this area.”

I laugh when I hear this, as I’ve heard it so many times from people who have gone on to surprise and amaze themselves. Everyone who has the goal of improving their self confidence believes deep down that they are beyond help, because they’ve felt this way all their lives and can’t imagine it changing. And it does change, every time. Not because I’m some kind of magician, but because the human heart and mind respond predictably to heartfelt encouragement, genuine positive feedback, and the undeniable truth about one’s true value and potential.

Here are some ways that I work with my clients on building their confidence, that I hope will help you too:

1) Watch and change your language

Probably the number one tool I use is pointing out the way that you talk about yourself. If you have low self confidence, you probably speak negatively about yourself, all the time. And the majority of it, if not all, is probably totally untrue or grossly exaggerated.

For example, yesterday a client who aspires to write her own book told me she “slaughtered” the English language in a short story she wrote. I took her to task on this as soon as I heard it. She is a good writer and most assuredly did not “slaughter” anything. She hasn’t fully owned her talent as a writer, and sabotages herself by slamming herself and her work publicly. This was a completely inaccurate statement, but when she hears herself saying it she punches herself yet again and keeps the truth of her talent hidden from herself and the world.

A far better way for her to describe or frame her experience (both verbally and in her own mind) would be to reflect on and express the truth about her accomplishment: “I finally wrote a short story yesterday, which was a great step forward for me. It’s probably not the very best I could do, but I’m proud of myself for doing it. The way to become the best writer I can be is by writing as often as I can.”

Also notice when you use “always” and “never” in negative ways, such as “I always make a mess of things” or “things never go my way”. These statements can never really be true, and this type of negative exaggeration poisons your mind and self-esteem.

2) Figure out whose voice it is

I recently did a module on the inner critic and limiting beliefs for my “Live a Life You Love Club”, a group of women who I’m working with over the course of a year on different areas of their lives. I had them write out all the negative beliefs they had about themselves, and to then identify who the person was who gave them that idea in the first place.

Almost every time, a negative idea that a client believes so fiercely about themselves (“I’m not as smart as other people”, “I’ll never amount to anything”, “I’m not creative”, “I’m a flake”, “I’m a failure”) came directly from someone in their past. Often this recollection of its origin comes as a complete shock, as this “fact” felt like it had been with them since they were born. Not so. And it’s usually not true at all. It probably wasn’t even true when they were first told it, long ago.

Whose voice(s) are you hearing in your head?

3) Get aggressive about pursuing truth

As I’ve mentioned (and often have to repeat, over and over), most of the confidence-crashing beliefs you have about yourself, however they developed at some point, aren’t true at all. Become aggressively curious about finding out the truth about yourself. Whenever you get down on yourself, ask yourself what it is you are telling yourself about you. Get a journal out, and write your beliefs down.

Are they 100% true? I seriously doubt it. What would be a kinder way to speak about this aspect of your life or personality? Write out the opposite of each negative statement. Could it be that the opposite is actually true? (often that’s the case – shocking!)

Imagine that you are a close friend of yourself. What is the truth that you would tell yourself about you, and these negative beliefs, through love’s eyes? If you find this hard to do, seek out a good, kind friend who loves you, and ask them to tell you all the good things they love about you and to give you a positive spin on these negative beliefs. Believe them.

Now, this isn’t to say that we don’t ever need to improve or work on aspects of our personalities. What I have found, though, is that most people with low self-confidence are absolutely marvelous people. They are kind, lovely people and often extremely capable or talented.

If you feel badly about yourself, it’s probably because somewhere along the way someone made you feel like you weren’t good enough and you believed them. I’m telling you, if you have low self esteem, chances are you are a really wonderful person, and you just haven’t realized it yet. It’s time you did.

So tell me, what challenges do you have with your own confidence? I’d love to hear from you in the Comments section below.