How to Stop Believing Lies Others Told You About You 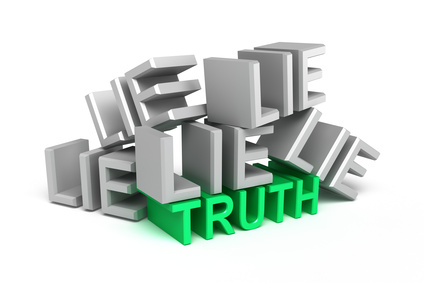 I work with my coaching clients by phone or Skype. Without visual distractions such as appearance or facial expression, I can listen really closely to tones and inflections of voice. As they tell me about themselves, often sharing things they haven’t told anyone else, I quite quickly get a feel for who a person is. And I immediately notice when something they say doesn’t fit.

One client who had worked her way up to a high level of management (with no formal training), performed on the side as a musician, and had invented an innovative product in her spare time, called herself “lazy." She wasn’t moving to the next level in her life and career that she desired, because she felt her inherent laziness would guarantee her failure.

At first she resisted my challenge to this self-concept, because she had believed it for most of her life. She really didn’t see herself as any other person would: an incredibly productive and highly self-actualized individual. When I pushed to find out where she got this rather nutty idea, we found it came from her family of origin.

Another client, a well-spoken man who had attended prestigious schools on various continents and intimidated me because of his obvious intelligence and high standards, told me he regularly humiliated himself speaking in public. He was a disastrous communicator and always botched work-related presentations.

Given the way he spoke during our exchanges, I didn’t believe him. Even if his usual eloquence was cut in half because of nerves, he’d still be more eloquent than most. I had him record one of these “disastrous” presentations and listen to it afterwards. He really didn’t want to, but complied.

“I couldn’t believe it,” he told me at our next session. “I made every point I’d planned to make, and what I said made sense. It was a really good presentation. I’m shocked.”

Where had he gotten the idea that he couldn’t communicate? We found it: when he was very small, his older siblings used to mock and shame him, and ridiculed him even more when he tried to counter verbally.

I’ve found that situations like these aren’t rare at all; they almost seem to be the norm. There are all these wonderful, capable people walking around out there who believe ridiculous things about themselves that someone else planted in their heads and hearts. They’ve believed these lies for so long that they don’t question them and often never have. The lies inevitably cripple them in some way, often significantly.

Here’s a process you can walk yourself through to identify and shed lies that may have been embedded in you:

How long have you been saying it? How does it make you feel in your heart and gut? How does it affect your life, your emotions, your self-image, your choices? If the impact is significant, you need to look closer.

This examination has two parts: evaluate the concept yourself and with the help of others. For example, I was often told growing up that I was difficult and hard to get along with. Until recently, I’d believed this about myself.

A sermon at church this summer made me question it. The pastor talked about the ways that other people “bless or curse” us. The words that parents speak to children can either encourage or positively label or “bless” them, or discourage or negatively label or “curse” them. A child who is repeatedly told he is of great value will grow up believing it, and a child who is told he is stupid or good-for-nothing will do the same.

I had an epiphany while sitting in the pew that day. I had been outraged at perceived injustices while growing up, and had often reacted in anger or aggressive outspokenness. I had been labeled “angry” and “difficult” and still believed it.

Yet when I thought of the feedback I most frequently heard as an adult, it was that I was easygoing and enjoyable to be around. Though I have moments where I might get irritated or frustrated, I’m usually friendly and focused on getting along, helping and contributing positively to the lives of others. I actually have had to actively address my excessive people-pleasing tendencies.

All the judgement and condemnation that I had carried for decades fell off my shoulders that morning and haven’t returned. I’m not that bad person I was told that I was. I never was.

Look at that negative belief you have about yourself. Ask yourself if it’s really true, if you look at the evidence. Reflect upon what the positive people who really adore you and encourage you tell you about yourself (or ask them). Do they agree with this negative view of you? Of course, there’s a small chance it might actually be true—I’m not encouraging you to dissociate from reality—yet most likely it’s either totally wrong or has been greatly exaggerated in your mind.

To help solidify the truth in your mind, heart and soul, write out the accusation or negative belief in a journal, and then describe all the evidence to the contrary. For example, you might have the idea that you don’t have a head for business (because your first boss told you so), but multiple successful decisions you’ve made over the years prove that this just isn’t true.

4) Watch out for the lie and counter it

Even after my client and I had reviewed the evidence that she was anything but lazy, she would still occasionally refer to herself that way. I had to catch and correct until she integrated the truth into her reality. When you’ve believed something about yourself for decades, it takes time to break the habit. Be on the lookout for when you think or verbalize any old or inaccurate belief, and correct it. If you still don’t quite believe it, remind yourself of the evidence to the contrary. Keep doing this until the last vestiges of the lie are gone.

If you’ve been single your whole life because “no one could stand living with you," remind yourself of the truth of what a loving, companionable person you really are and bring that truth with you on your next date.

If you dream of starting your own business but were always told you were a “screw-up” and a “failure," document all the times you’ve succeeded and go take that first step.

Before I finish here, I want to share with you one more thing that I’ve noticed about this phenomenon. Whatever it is that some misguided individual (who deserves to be forgiven, by the way) told you at some point in your life, chances are that you are really actually the opposite. This means that not only are you not that bad thing, you are probably actually more blessed in that department than you’d ever imagined. If only you could just see it. And start living it.

What has been your experience in this area? Were you, or are you, frequently told something about yourself that isn’t true but you’d somehow believed it to be true? How has it affected you? How can you shed it moving forward? I would love to have your input in the Comments section below…