Is a Red Sock Staining the Laundry of Your Life? 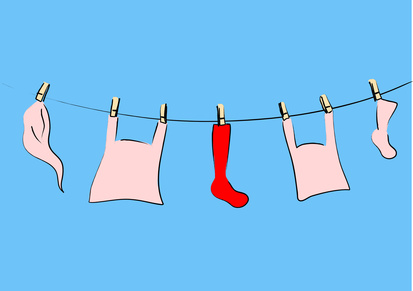 Is there anything in your life that you really dread? There was a commitment that I was involved in for quite some time (which shall remain nameless), and as the years went by I successfully decreased the time spent on it until it was just a handful of hours a month.

I noticed a strange phenomenon, though. When I was initially spending a lot of hours on this, it drained me and frustrated me and I fantasized about how nice it would be to do less. I progressively decreased the hours committed over time, yet every time I did so it felt better for a short while and then I started feeling drained and frustrated again. In fact, a handful of hours doing this eventually started feeling the same as many more originally had.

This baffled me – and I started to wonder if I was the problem. I talked to a wise friend about my situation, and she diagnosed the situation within seconds.

“The tiny red sock that will wreck your entire load of white laundry if it’s in there. It doesn’t matter if it’s a huge sock or a baby sock, it will still bleed and stain everything.”

She told me that years ago she had had a part-time job which she really disliked. She was out of her comfort zone, didn’t enjoy the work, and found it really stressful. Yet it paid extremely well and was quite prestigious.

“Over several years,” she said, “I kept decreasing the number of days and hours I was spending at this job, yet it was crazy how much it still affected my life. When I was down to just two days a week, I dreaded Mondays and Tuesdays all weekend. After the two days were blessedly done, I spent the balance of the week recovering my energy, if I wasn’t laid out flat by migraines. I hated it but I was scared to quit. Ironically it was something I’d always aspired to, not knowing I wouldn’t actually like it. And we needed the money.” But quit she eventually did. And apparently, the money she had been earning quickly started coming from another unexpected and much more palatable source.

Is there a red sock in your life’s white laundry that needs to be removed once and for all? It might not just be a job that saps or terrorizes you whether it comes in large or small doses.

1) The friend who always says something that upsets or hurts you (even if disguised as a “joke”) every time you talk to them (for more help with this one, read this post: Don’t Try to Reason With Unreasonable People )

2) The habit that’s hijacked your life that stains or drags down everything else even when you have it more or less “under control” (Smoking? Alcohol? Not getting enough sleep? Overspending on credit cards? Casual sex that you tell yourself is for fun yet leaves you feeling bad every time afterwards?)

3) A social behavior that consistently gets you into trouble, stains your reputation or nags at your conscience; examples could include gossiping, telling white lies or exaggerating, talking behind people’s backs, being frequently late etc.

4) A social commitment that you dread on a regular basis

One of my coaching clients has to go to a weekly Sunday night dinner with his inlaws that frequently deteriorates into dissension and discomfort. He unfailingly argues with his spouse on the way home, tosses and turns in bed that night and wakes up on Monday morning in a rotten mood (and he has the kind of job that makes Monday mornings tough enough without additional provocation).

A few weeks ago, I finally threw out the red sock commitment I described above. What a relief, my weeks and life feel so different now. I still have a few other red-sock areas to deal with, though, like my habit of not getting quite enough sleep most nights lately. That habit surely subtly stains many aspects of my day, from my mood to my immune system, energy level and more…and I won’t realize just how much my life has been stained by this until I start going to bed earlier and reap the benefits.

What do you need to pull out of the laundry load of your life to get things all nice and sparkly white and fresh again? Let me know in the comment section below!