The War of Art: The Reason You’re Avoiding Your Most Important Work 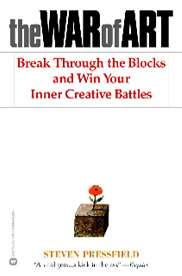 A few weeks ago I attended a presentation in New York on a  yummy topic: "Do It For Love AND Money." Deanna Zandt was one of the speakers, and she emphasized the importance of reading Steven Pressfield’s classic book, The War of Art.

She specifically referred to one section which urges you to ask:

What is the ONE thing I would still do, if I was the last person left on earth?

What is it for you?

I was surprised by my answer. I would grab my flamenco shoes and find the nearest large theater. When I lived in Puerto Vallarta, I was given not one but two gorgeous hotel theaters to practice my dancing in. Free of charge, for hours at a time. I would dance until I could hardly walk. If I was the last person on earth, I’d want my own theater again and would dance for hours.

Over the past year, I’d been letting my dancing slide. My last major performance was last spring. I only occasionally made it to dance classes and practiced even less. I’d decided for now my writing and coaching work were my priority.

According to Pressfield’s test, I was making a grave mistake by letting dancing languish. Not that flamenco is my most important contribution to humanity, but it’s an essential part of me and needs to have its place. Something inside me withers if I’m not dancing, and I was ignoring that.

Are you currently doing your "one thing"? If not, why? If you don’t know why, keep reading.

I read Pressfield’s book. His words gripped me by the throat and dragged me across the pages. I didn’t stop reading until I finished. It’s essential reading if you believe you’re here for a purpose, or know that there’s something critical you want to change about your life but can’t seem to. That "something" you know with every cell in your body that you need to do, but can’t seem to get yourself to do.

It could be writing that screenplay, or losing weight, or starting a business. We’re not just talking about your "one thing," we’re talking about any endeavour that will move you toward your highest potential. As Pressfield writes, it’s "any act that rejects immediate gratification in favor of long-term growth, health or integrity."

According to Pressfield, there is a malignant presence that exists to block you. It rises up against you to stop you from doing what you most need to do. He calls this force Resistance. As Pressfield puts it: "The more important a call or action is to our soul’s evolution, the more Resistance we will feel toward pursuing it."

Can you think of times when you had a great opportunity—a chance at that "big break" you wanted more than anything else—and you totally blew it? I mean spectacularly screwed it up.

A few years ago, when I finally really threw myself into creating my platform as a wellness expert, I almost immediately got an opportunity to contribute to a major international women’s magazine. The health editor expressed interest in my work, and they asked for some writing samples. I sent nothing for nine months. It was on my mind every single day, but I just COULD. NOT. GET. MYSELF. TO. SIT. DOWN. AND. WRITE. IT.

It finally got so ridiculous that I had to send something, so I threw something together (and I mean threw) and sent it. They said it wasn’t quite what they were looking for, but to continue sending samples and ideas in. I never sent another thing, even though that opportunity could probably have made my entire career had I persisted. Resistance.

One of my coaching clients is a talented actor. After years of pursuing his big break, he met a major agent at a party. The agent liked his style and asked him to call the next week. He didn’t. He couldn’t. Even though the agent had told him to! Months after, he hired me so I would force him to call the agent. Crazy. Resistance.

Outsiders might ask: "What is wrong with you people? How could you not send that article in, how could he not make a simple call?"

When something is that important, when that moment has come that could change everything, there is truly a force that descends that is so heavy, so paralyzing. It throws itself on you and pins you to the floor.

It makes you do insane things. I thought it was my own self-sabotage or fear of success (or failure) that was at the root of my procrastination. To some degree it was, yet I know now that the predominant force that held me back so inexplicably was this Resistance thing.

If you decide to finally get serious about losing weight, you’ll get invited to a party at an all-you-can-eat buffet. If you finally get a book deal (contingent on completing your manuscript by deadline), you’ll find you suddenly can’t write a thing.

I wage a battle every night at around 10 p.m. I’m determined to get to bed early and get enough sleep, so I can get up early and have a productive day. Yet every night I get seized by a bizarre, irresistibly compelling urge to surf the internet reading blogs and silly news stories. If I let it take hold, I may not stumble upstairs until well after midnight. It’s different now, though, now that I know that the problem isn’t me—that I’m actually in a battle for my life. I’m finally winning.

Writes Pressfield: "Resistance’s goal is not to wound or disable. Resistance aims to kill. Its target is the epicenter of our being: our genius, our soul, the unique and priceless gift we were put on earth to give and that no one else has but us. Resistance means business. When we fight it, we are in a war to the death."

Put on your flak jacket and stand up to this. Don’t reach for that drink at the party if you’ve promised your family (and yourself) you won’t have another one. Throw away that pack of cigarettes you just bought—you’ve managed to stop for a week already, refuse to be taken down.

When you’re tempted to clean your entire house instead of writing, back away from the vacuum cleaner and get your butt into your desk chair. When you feel like staying home and eating ice cream in front of the TV, instead of going to that audition, recognize the force behind the urge (it’s NOT you). Get yourself out the door, no matter what it takes.

Because, as Pressfield writes in his follow-up book, Do The Work, when you beat resistance and move into whatever it is that you need to do, another mystical force comes along beside you. He calls it Assistance. And this is where the magic begins. Everything good that resistance was trying to keep you from, begins to happen. Don’t miss it for the world.

What’s your "one thing" you’d do if you were the last person left on earth? Does Resistance manifest itself in your life? What is the change that you know you need to make, but you find it next to impossible to do what you need to do? Share it with us by commenting below.