Why I Stopped Drinking Wine 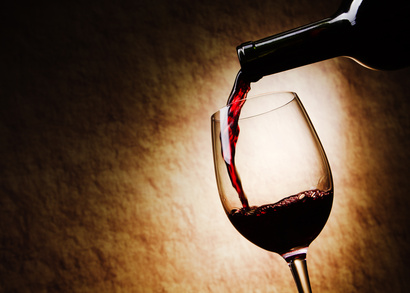 I love wine. I’ve never been a big drinker and usually wouldn’t have more than one or two glasses with dinner, but I really adore the way it tastes and makes me feel after the first few sips. Yet as much as I love it, I’ve deliberately avoided the habit of having it at home with dinner, first because even though I’m not a big drinker, I have an addictive personality (not officially diagnosed, yet the nature of my relationship to chocolate cake doesn’t leave much room for debate), and second because my mother had an aggressive form of breast cancer in her forties.

I still enjoyed wine quite regularly under certain circumstances, though. To me wine means fun and glamour: lovely meals al fresco in the summer; delicious dinner parties with friends; a glass of cheap yet divine Chianti accenting a delectable plate of ravioli in a trattoria in Florence.

The positive health effects of resveratrol in red wine have also more recently glamourized the health benefits of this gorgeous liquid, to the point where one might even feel noble drinking it, not unlike the virtuous thrill one might get from doing sit-ups (I say “might” as it’s been too long since I’ve done a sit-up for me to comment on this accurately).

The other day though, I heard Harvard-trained integrative gynecologist Sara Gottfried repeat this statement that a friend had told her: “What you think wine is giving you, it’s actually taking away from you.”

The truth of this resonated so completely with me, that it pushed me over the edge. No more wine, or alcohol, period, except on the rarest occasions like a special dinner.

I already knew many of the reasons I’m about to discuss, but bringing these facts on alcohol and health all together, in combination with Gottfriend’s statement, makes my decision pretty clear:

Many of us like to have a glass of wine at the end of a long day, to help us relax and wind down. Yet alcohol is well known to adversely affect the quality of sleep, that precious rest you need to help you physically and mentally recover from that long stressful day. According a summary of facts about alcohol from the NIH’s National Institute on Alcohol Abuse and Alcoholism (NIAAA), “studies show that a moderate dose of alcohol consumed as much as six hours before bedtime can increase wakefulness during the second half of sleep.”

As I mentioned earlier my mom had an aggressive form of breast cancer in her forties, when she was not much older than I am now. In the years preceding her diagnosis, she and my father had a habit of sitting down together for a drink every night as they watched TV. Various studies have shown a link between regular alcohol intake and breast cancer (and other cancers). Again from the NIAAA: “Recent studies suggest that alcohol may play an indirect role in the development of breast cancer…alcohol increases estrogen levels in premenopausal women, which, in turn, may promote breast cancer.”

3) Alcohol messes with your blood sugar

My grandmother had diabetes and I have been a sugar fiend for most of my life. I’m much better now, but still am probably at risk for developing insulin resistance if I’m not careful. According to the NIAAA, “alcohol consumption interferes with all three glucose sources and with the actions of the regulatory hormones…acute alcohol consumption, especially in combination with sugar, augments insulin secretion and causes temporary hypoglycemia.” Good thing I long ago kicked my favorite habit of rewarding myself after a particularly hard day with a big slab of chocolate cake and a glass of red (telling myself I was getting a double dose of antioxidants, ha!).

4) Alcohol may impair your body’s ability to handle stress

I knew this intuitively — typically the first glass would go down so nicely but by the end of the evening I would feel off and would also notice distinctly low energy the next morning. A 1993 study in the Journal of Clinical Endocrinology and Metabolism found that “mild intoxication with ethanol may impair the ability of the HPA (hypothalamic-pituitary-adrenal) axis to respond to physiological stressors.” And from the NIAAA: “Much research demonstrates that alcohol actually induces the stress response by stimulating hormone release by the hypothalamus, pituitary and adrenal glands.” So much for that “relaxing” drink after work.

5) Alcohol can dampen your immune system

This consequence of drinking has actually been my biggest motivator to quit. I’ve noticed it more than anything else and I’ve lost income because of it. On several occasions in the last few months, I’ve come down with cold or flu symptoms within hours of a wine-accompanied lunch or dinner with a friend. It’s happened too consistently to be a coincidence. Sure, I’ve also been more likely to have a sweet dessert (sugar also inhibits immune function) but that hasn’t always been the case. Again from the NIAAA: “An overwhelming amount of evidence reveals that both acute and chronic alcohol exposure suppresses all branches of the immune system.”

Sigh. I’m really sorry to be such a party-pooper. Yet one of the things I’ve come to appreciate more and more is that feeling alert, energetic and healthy day-in day-out is much more valuable than the fun of indulging oneself for a few hours. Sure, I’ll still occasionally have wine (and chocolate cake) on certain occasions, in fact I did so recently. And felt terrible the next day, sigh. One of the things about eating and living well is your body lets you know a lot more clearly when you’ve just done something it doesn’t like very much. It may not be fun, but I think that’s a really great thing.

For more information on alcohol and health from the NIAAA, click here .

What has been your experience with alcohol, have you also noticed that it affects you negatively once the lovely buzz wears off? Would love to hear from you in the comment section below.